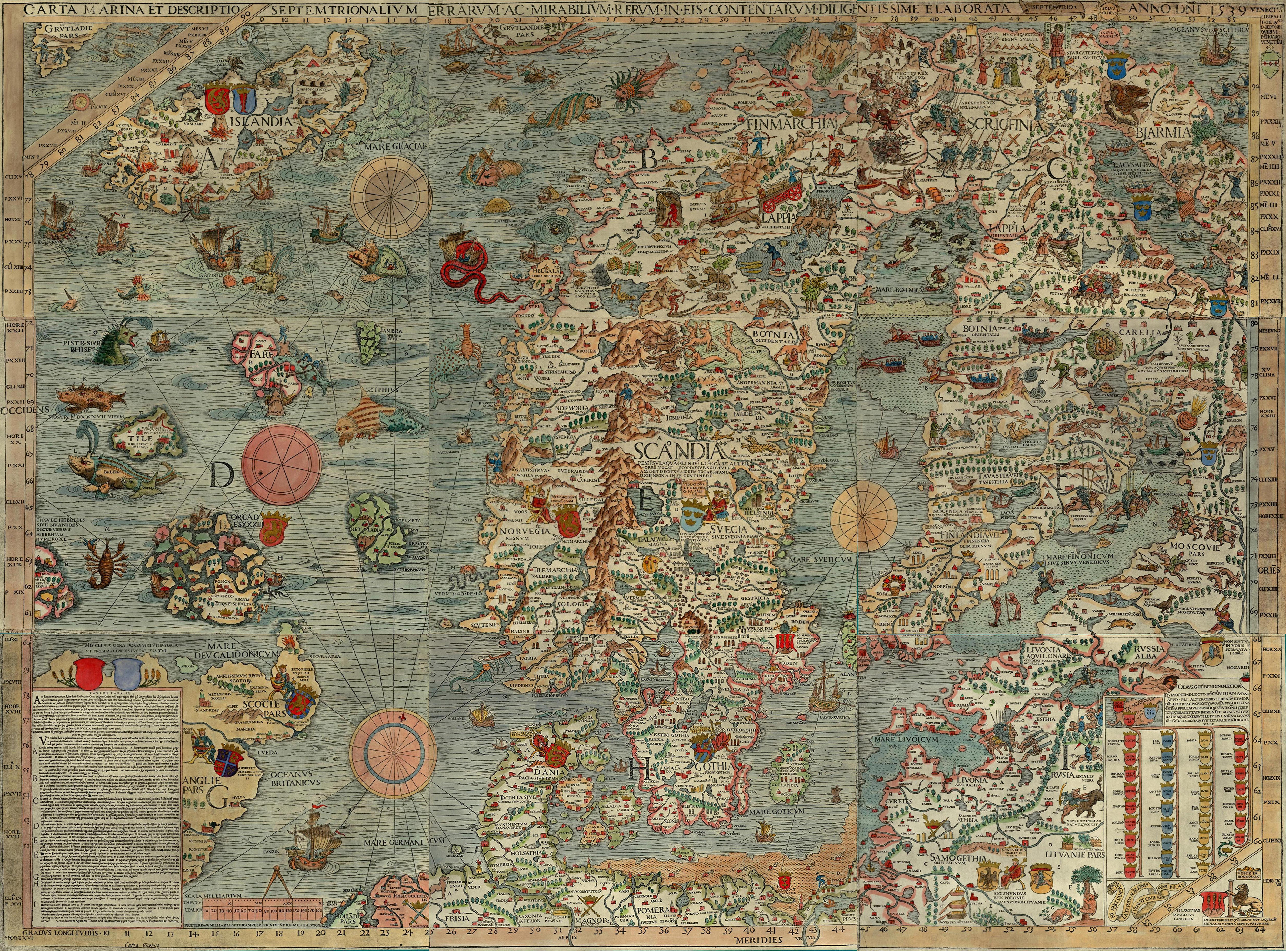 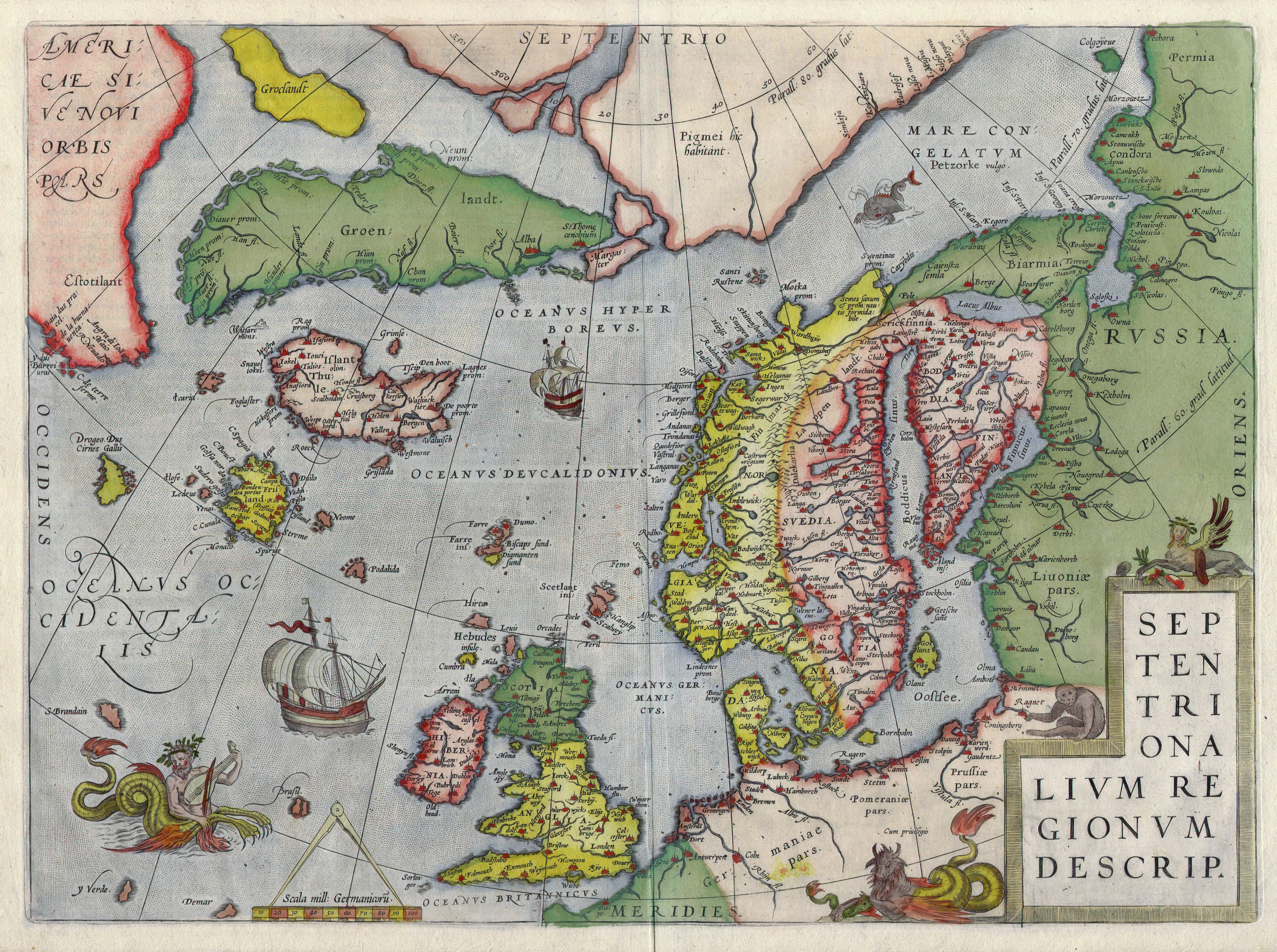 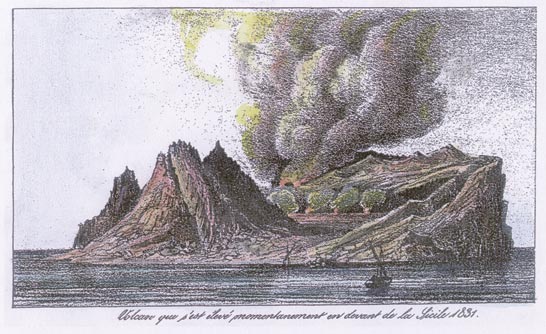 Graham Island’s most recent appearance as an island was in July 1831. The first sign of an eruption was a period of high seismic activity spanning from 28 June to 10 July reported by the nearby town of Sciacca.[1] On July 4, an odor of sulfur spread through the town reportedly in such quantities that it blackened silver.[1] On 13 July, a column of smoke was clearly seen from St. Domenico. The residents believed it to be a ferry on fire.[1] On the same day, the brig Gustavo passed through the area, confirming a bubbling in the sea that the captain thought was a sea monster. Another ship reported dead fish floating in the water. By 17 July, a fully grown islet had formed.[1] 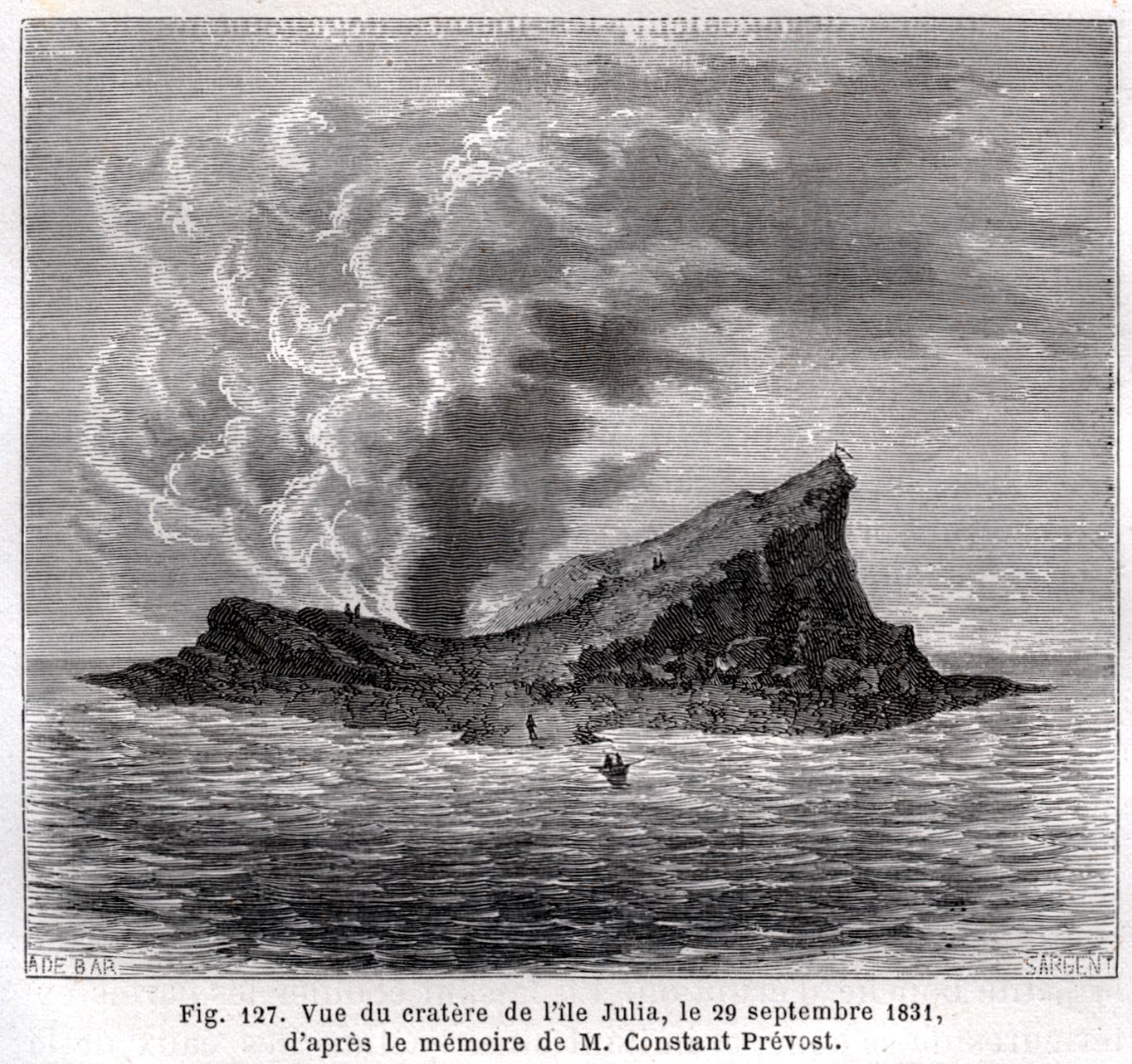 On 1 August 1831, Humphrey Fleming Senhouse, the captain of the first rate Royal Navy ship of the line HMS St Vincent claimed the Island for the British Crown and named it after Sir James Graham, the First Lord of the Admiralty. The eruptions of 1831 resulted in the island increasing in size to about 4 km (2.5 mi). However, it was composed of loose tephra, easily eroded by wave action, and when the eruptive episode ended it rapidly subsided, disappearing beneath the waves in January 1832, before the issue of its sovereignty could be resolved. Fresh eruptions in 1863 caused the island to reappear briefly before again sinking below sea level. At its maximum (in July and August 1831), it was 4,800 m (15,700 ft) in circumference and 63 m (207 ft) in height.[1] It sported two small lakes, the larger of which was 20 metres (66 ft) in circumference and 2 m (6 ft 7 in) in depth.[1]
[ref] 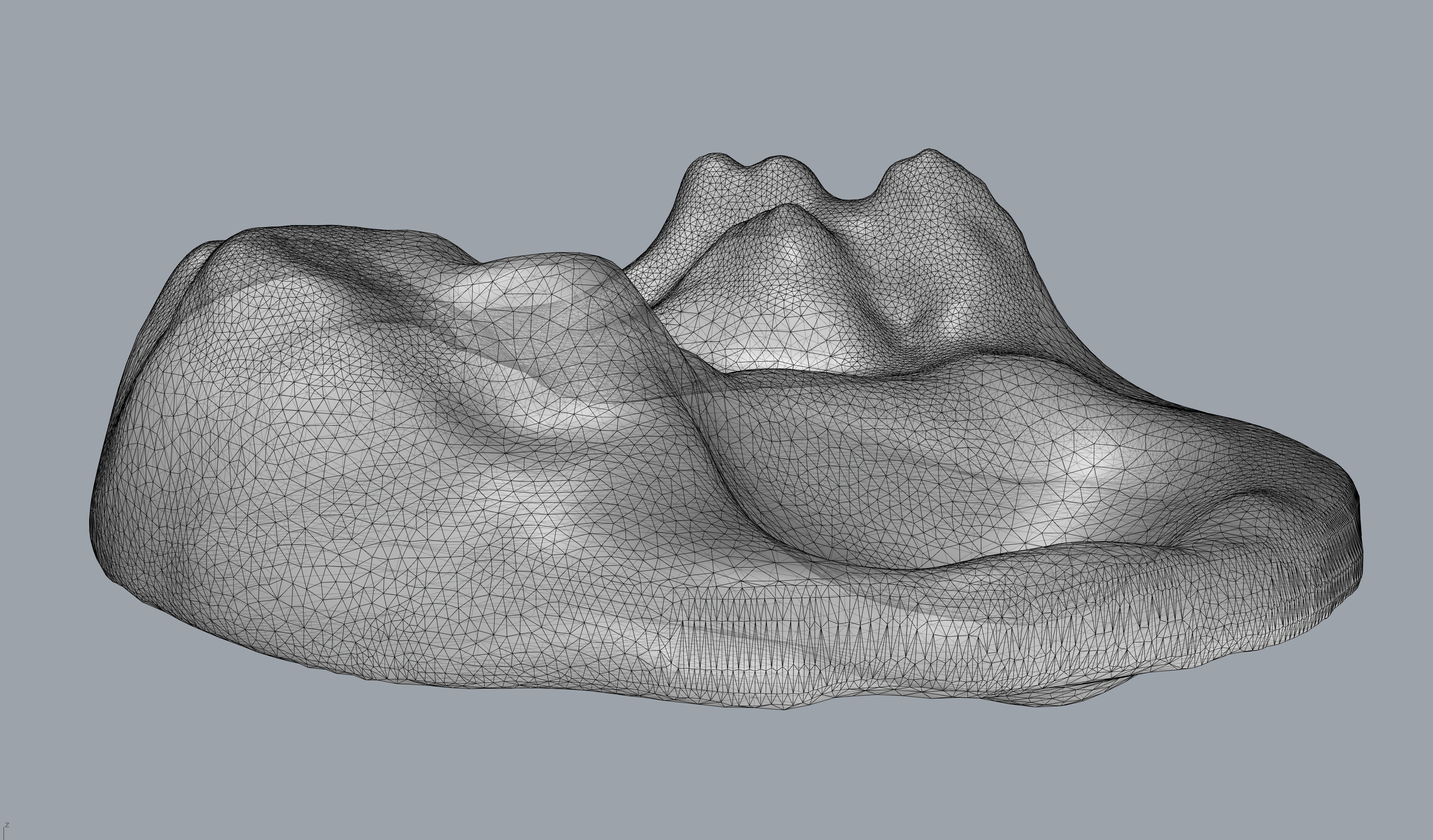 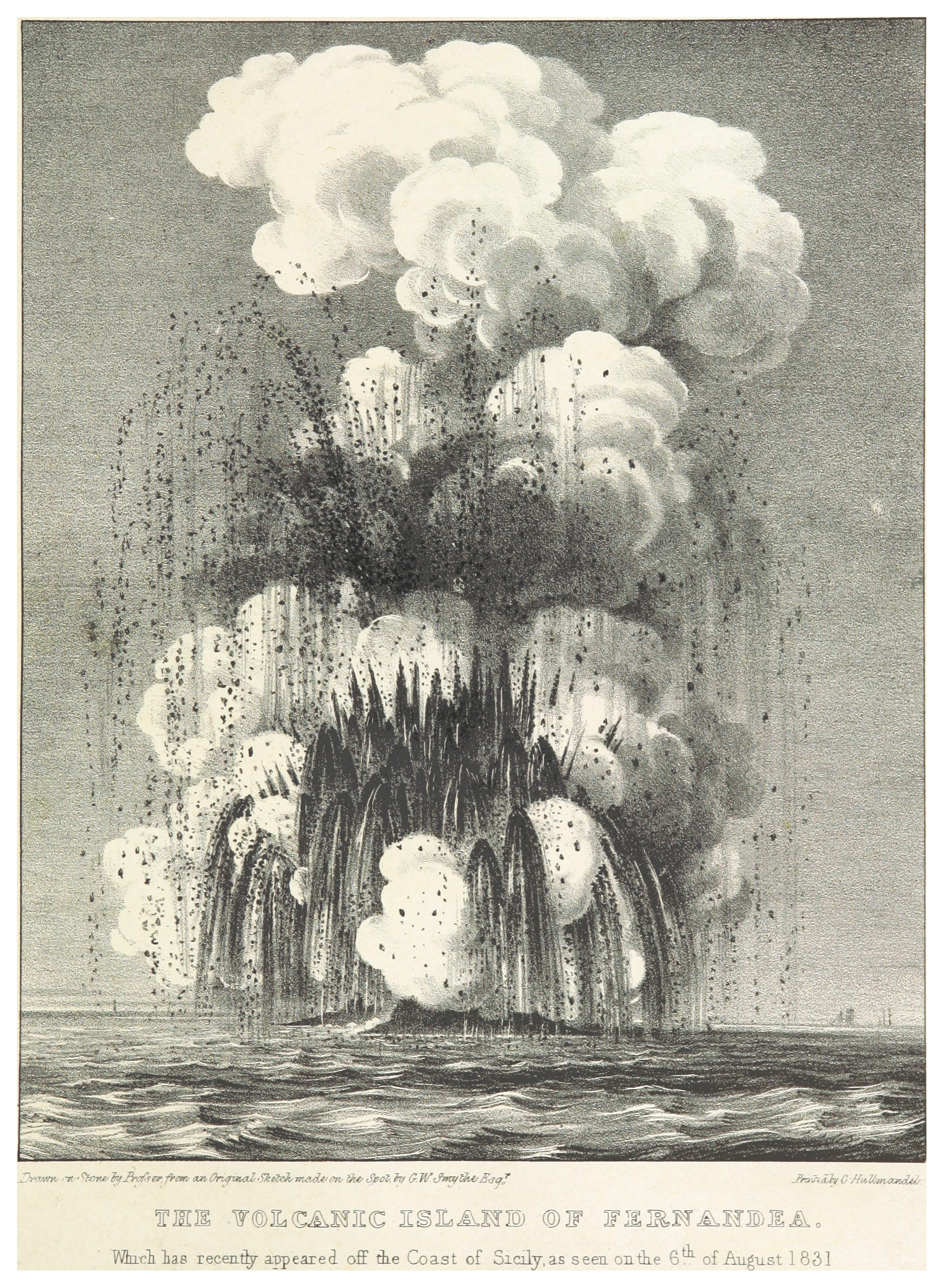 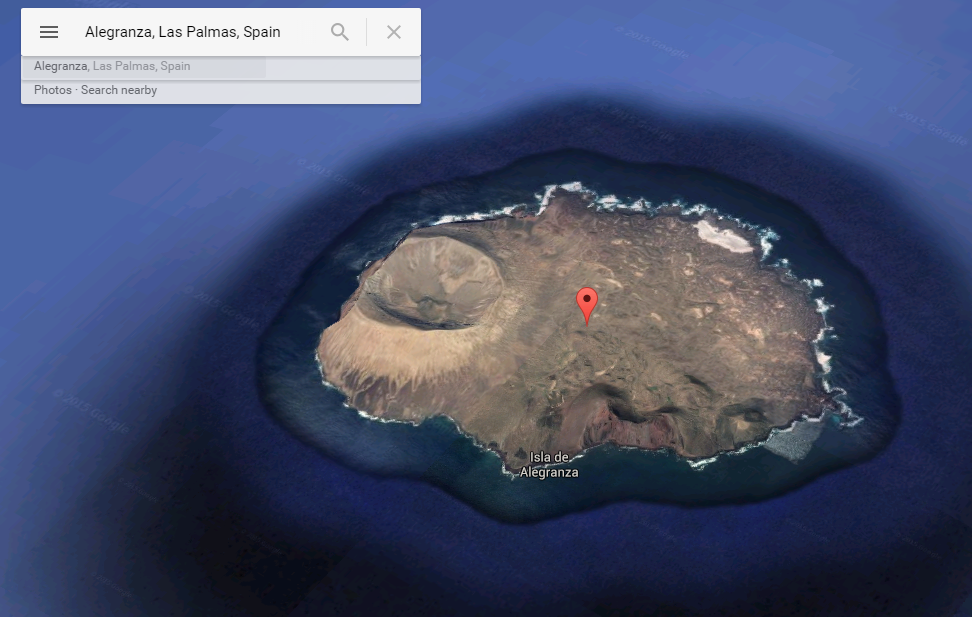 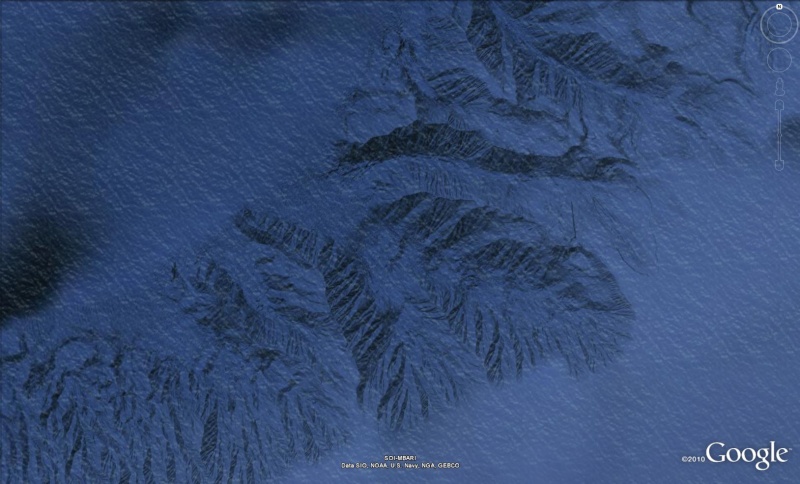 Bermeja is an islet lying off the north coast of the Yucatán peninsula according to several maps of the Gulf of Mexico from the 16th to the 20th centuries. Despite being located somewhat precisely in relation to neighboring islands by notable Spanish cartographers of the 16th century, the island was not found in a 1997 survey, nor in an extensive 2009 study conducted by the National Autonomous University of Mexico (UNAM) on behalf of the Mexican Chamber of Deputies. Interest in the island arose in late 2008, fueled by the fact that if such an island existed, it would be important for determining the boundaries for exploitation rights of oil in Hoyos de Dona (Doughnut Holes) in the Gulf of Mexico.

The island was first mentioned by Alonso de Santa Cruz in El Yucatán e Islas Adyacentes, a list of islands of the region published in Madrid in 1539.[2] Its precise location is given in Espejo de navegantes (Seville, ca. 1540) by Alonso de Chaves, who wrote that from a distance, the small island looks “blondish or reddish” (in Spanish: bermeja).[2] According to Michel Antochiw Kolpa, a French-Mexican cartographer, since 1844 British maps have reported the sinking of the island some sixty fathoms below.

Explanations for its apparent disappearance include an erroneous observation by the early cartographers, shifts in the geography of the ocean floor, rising sea levels and conspiracy theories claiming that the CIA destroyed the island to expand the economic zone allotted to the United States.
[ref] 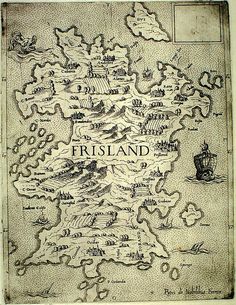 By chance Nicolò is rescued by Zichmni, who is described as prince who owned some islands called Porlanda off the southern coast of Frislanda, and who ruled the duchy of Sorant, or Sorand, south-east of Frislanda. It has been suggested that Frislanda is in fact a stand-in for the Faroe Islands with individual islands mistakenly merged into a single landmass by Nicolò the younger, although Frisland and the Faroe Islands both appear on several maps, many hundreds of miles apart.

Nicolò invites Antonio to come to Frislanda with him, which he does, and stays for fourteen years. Under Zichmni’s direction, Antonio attacks “Estlanda”, which is ostensibly the Shetland Islands, as indicated by the similarity of place names mentioned in the letters.

Zichmni then attempts to attack Iceland. After finding it too well defended, he attacks seven islands along its eastern side: Bres, Talas, Broas, Iscant, Trans, Mimant, Damberc. All of these islands are fictitious. An alternate interpretation finds that in transcribing the letters the Zen brothers’ descendant mistook a reference to “Estlanda” for “Islanda” or Iceland, thus accounting for both the presence of those superfluous islands off Iceland and the mysterious absence of an equal number of islands off of the Shetland Islands. Further evidence in support of this claim is the similarity of place names in the Zenos’ “Islanda” to modern day Shetland, for instance the island of Bressay for “Bres” and Danaberg sound near Lerwick for “Damberc”.
[ref] 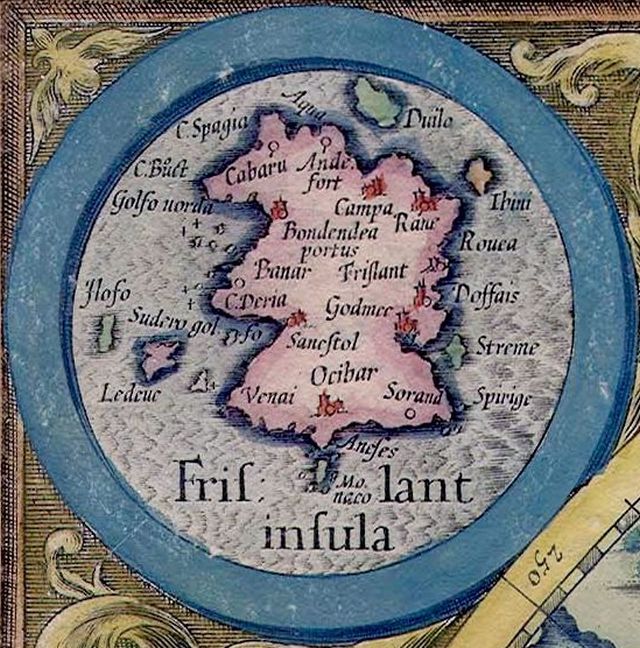